© Don Miskel. Unauthorized use and/or duplication of this material without express and written permission from this blog’s author and/or owner is strictly prohibited. Excerpts and links may be used, provided that full and clear credit is given to Don Miskel with appropriate and specific direction to the original content. 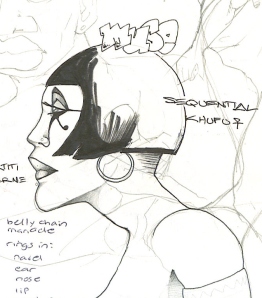 Extreme was the best word to describe her. It was a dulled extreme, verging on the borders of exotic. Nefertiti had materialized in the doorway to my bedroom, standing in profile, cloaked in the shadows.

Her eyes and complexion seemed to glow even more than the gold that seemed to adorn every part of her. Her skin was smooth, the color of brownish-red earth and every part of her was elongated and graceful. She was a tall woman, standing more majestic than my mere six feet, her head crowned in a coal-black, short-cut bob.

There was gold which fell in large hoops from her earlobes, a manacle on one arm. Studs on the right side of her nose and beneath her sweet bottom lip. Each long, thin finger was fitted with a ring and she even had one on the second toe of her left foot. A chain encircled her hips, rising in the middle, threaded through the ring in her navel. More than her nakedness, I noticed the small gilded circles which pierced each nipple of her small, rounded breasts.

“No,” I answered in a vocalized whisper, unable to match her advanced level of communication.

Her eyebrows raised slightly, eyes glowing red, made-up in the symbol of Horus’ all-seeing. Where is he?

Her “voice” was like notes of music in my head. It was a language that was comprised of no words, yet I understood her clearly.

I stood cautiously, not wanting her to disappear. I approached slowly, taking her hand gently in mine. “I dont know,” I replied softly. “But you can stay with me, tonight. I’ll be your Akenhaten.”

For a while, she was silent, even in my mind. I dared not speak again, afraid the wrong words would cause her to disintergrate and fade from this world.

Then, without any words or musical notes, she spoke to me in a language that transcended dimensions: a smile. She took my other hand into hers, guiding them both to the rings in her dark nipples.

To that, she nodded, came close and kissed me.

Reflections of a Christian Man, Husband, Father and Pastor

Blogging My Way to a Better Life

the writings, musings, and photography of a dream smith

The Writing of Kerry E.B. Black

A blog from the heart, to mess with the head.

Fiction authors and their shorts

Put A Wedge In It!

There in no on way to love with Author Katrina Gurl

Just me being me...you ready?

The Musings of Debbie Manber Kupfer

A collection at random